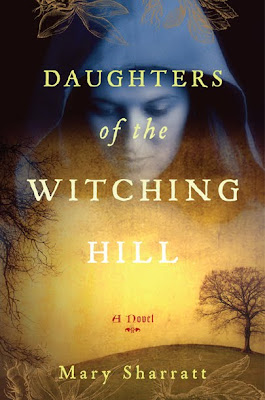 DAUGHTERS OF THE WITCHING HILL is a novel that celebrates strong mothers and daughters.

Mother Demdike, the most notorious of the Pendle Witches of 1612, had the most infamous reputation. Before her arrest on witchcraft charges at the age of eighty, she had worked as a cunning woman and healer for decades, training both her daughter, Elizabeth Device, and her granddaughter, Alizon Device, in her craft.

This is what court clerk Thomas Potts had to say about Mother Demdike in The Wonderfull Discoverie of Witches in the Countie of Lancaster:

She was a very old woman, about the age of Foure-score yeares, and had been a Witch for fiftie yeares. Shee dwelt in the Forrest of Pendle, a vast place, fitte for her profession: What shee committed in her time, no man knowes. . . . Shee was a generall agent for the Devill in all these partes: no man escaped her, or her Furies.

Not bad for an eigty-year-old lady! I believe that Mother Demdike was so frightening to her foes because she was a woman who embraced her powers wholeheartedly. Strong women are scary.

What intrigued me is that although she died in prison before she could come to trial, Potts pays a great deal of attention to her, going out of his way to convince his readers that she was a dangerous witch of untold powers. Reading the trial transcripts against the grain, I was amazed at how Bess’s strength of character blazed forth in the document written expressly to vilify her.

Bess freely admitted to being a healer and a cunning woman. Her neighbours called on her to cure their children and their cattle.

In contrast her granddaughter Alizon, who appeared to be a teenager at the time of her trial, seemed to view her own powers with a mixture of bewilderment and terror. Her misadventures in struggling to come to terms with this troubling birthright unleashed the tragedy which led to her arrest and the downfall of her entire family. Although the first to be accused of witchcraft, Alizon was the last to be tried at Lancaster. Her final recorded words on the day before she was hanged were a passionate vindication of her grandmother’s legacy as a healer.

What wisdom would Mother Demdike pass on to mothers and daughters of our time? Seize your power while you can, for the tide can turn so quickly, especially when shifting political currents encourage those who monger any kind of witch hunt. Treasure your power. Use it wisely. There’s much blessing to be found there. Don’t turn away or deny it or flee from it. The refusal of the call only leads to tragedy. Embrace your power and be true to yourself.
Posted by Mary Sharratt at 04:11