Thoughts after the first Sunday in Advent


Advent reminds me why I first began to haunt churches.  It all comes back again.

I am a church mouse, unable to pass one without pushing open doors and finding myself in a deeply moving place. I particularly love small stone churches dimly lit, full of candlelight and old incense. Our lives change so fast; you go to sleep and find the world changed in the morning.  And so I go through England and Europe pushing open the wood doors of churches with faded frescos on the wall, kneelers embroidered by the altar guild, dipping candles and worn prayer books to find my roots and my stability.

I wasn’t raised with any spiritual tradition and I think always wanted one. In my early forties, I became an Anglican.  I could have chosen a number of paths but this one I think found me. I live in the heart of New York City and unreasonably wanted to belong to a small English church. Unreasonably I found one down the street.  We use the original 16th century Common Prayer translations, the very same words which Shakespeare knew by heart.  I hear the church bells through my window. I live in one of the greatest, fastest-paced cities in the world, and belong to an English parish church.

Yesterday, December 2nd, Advent (the period of waiting for the birth in Bethlehem) began. There was anticipation in the air of all sorts of mysterious but comforting things, mysteries which are both fresh and comfortably worn as childhood books. We are traveling the weeks until Christmastide.  We are waiting for something we know will come in this world where you do not always know.

I was writing my first novel at the time I became an Anglican; it was an Elizabethan novel about an actor who longs to be a priest, and has several scenes set in and around the church of St. Mary Aldermanbury, near Cripplegate in London. The church was first built around 1100 and destroyed in the Great Fire of 1666 and then went on to a complicated history of rebuilding. Of all the hundreds of churches I have visited, this one that I have only seen in my mind (now only foundation stones and a garden remain) is one of the dearest. My hero’s journey of faith became mine or perhaps it was the other way around. The novel Nicholas Cooke: actor, soldier, physician, priest, the first book of a trilogy, has gone on to its own rich journey.

Today in church they sang the great Litany of Thomas Tallis (died 1585). The Litanist led the procession around the church singing the petitions, followed by acolytes bearing candles, clergy and the congregation. The words were the same as heard by the Elizabethans. “That it may please thee to give and preserve to our use the kindly fruits of the earth, so as in due time we may enjoy them; We beseech thee to hear us, good Lord.”


That all our good wishes may be heard and granted! And in this season of Advent we can believe that they are heard and meanwhile, as we wait and listen, so much of what we long for seems completely possible.
___________________________
About the author: Historical novelist Stephanie Cowell is the author of Nicholas Cooke, The Physician of London, The Players: a novel of the young Shakespeare, Marrying Mozart and Claude & Camille: a novel of Monet. She is the recipient of the American Book Award. Her work has been translated into nine languages. She is currently working on several projects. Her website is http://www.stephaniecowell.com 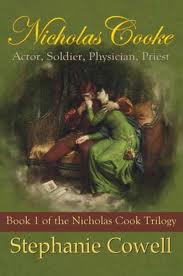